Dr. Chapin grew up on his family’s farm in upstate New York. As a young man he was very active in 4-H and worked with sheep and various livestock. He also enjoyed working at a local veterinary hospital. Both his upbringing and background in animal care made veterinary medicine a very natural career path for him.

He first began his veterinary career in a mixed animal practice, but found he wanted to focus more on small animal medicine and surgery. Dr. Chapin moved to the northeast and joined the Broadview Animal Hospital team in 2005. He then became an owner of the practice in 2008.

Although Dr. Chapin enjoys all aspects of veterinary medicine, he is most passionate about soft tissue and orthopedic surgery. He has pursued continuing education to further his skills by attending the Ohio State Fracture Management course, and has also undergone training to perform Tibial Tuberosity Advancement (TTA) surgery to manage anterior cruciate ligament (ACL) injuries in dogs. Although not board certified, Dr. Chapin also manages broken bones, luxating patella (knee cap) disease, and femoral head and neck ostectomies (FHO surgery). He says, “I truly love seeing my patients heal and get back to being active and happy after an injury. I want to be sure everything goes smoothly with my patients throughout the recovery process. I feel a duty to help my clients maintain peace of mind through health challenges.”

Dr. Chapin says that he enjoys practicing veterinary medicine because he has “always had a deep desire to help heal animals when they are sick or hurt. I also thoroughly enjoy getting to know my patients. They each have their own personality.”

Interestingly enough, Dr. Chapin met his wife, Hilary, during their time together in 4-H as teenagers. They have two young children. Dr. Chapin loves to travel with his family and also enjoys building, skiing and fly fishing.

The Chapin family has a plethora of pets. They have four cats named Lilo, Princess Kiss, Camella, and Flowery. (As you can tell, the kids have taken an active role in naming the pets.) They also own five dogs: a Corgi named Gabby, a Cocker Spaniel named Willy, a Labrador Retriever named Rosie, and two Great Pyrenees that are livestock guardian dogs, named Rita and Chunk. They watch over the forty Romney sheep that also reside at the Chapin home, which is aptly named “Smiling Sheep Farm”. The family takes pride in showing the sheep nationally and selling their beautiful fleeces.

Born and brought up in New Brunswick, Canada, Dr. Franco Girouard was the youngest of six. Both his parents and three older brothers were all in the human medical field which influenced his decision to become a doctor.  His love of animals however lead him to the veterinary side as he was always fascinated by biology of animals and medicine.  He has always enjoyed the freedom of general medicine and the ability to treat all aspects of a patient from routine care to surgery.

Dr. Girouard attended undergraduate at Unversite’ de Moncton where he received a BSC in biology and a BA in psychology.  From there he went on to St. Georges University of Veterinary Medicine in Grenada, West Indies for three years before finishing his medical rotations at Louisiana State University. 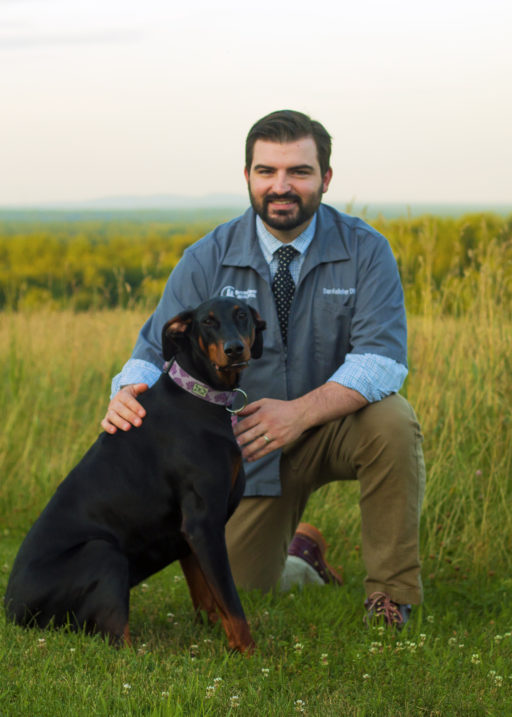 Dr. Daniel Kelleher grew up in Beverly Massachusetts as one of six children.  His passion for animals stems from his childhood and first dog, “Slick”- a Belgian Shepherd.  He attended the University of New Hampshire receiving his BS in Animal Science. He went on to obtain his doctorate in veterinary medicine from Michigan State University.

Since then he has joined the Reproductive Department and has completed training with Minitube of America (formerly MOFA), is PennHip certified and USDA accredited.  Within reproduction, Dr. Kelleher is especially interested in male infertility.  He takes satisfaction working with all breeds but specifically the protection breeds.

Besides reproductive medicine, Dr. Kelleher also enjoys dentistry, surgery and treating our exotic patients.  He is Fear Free certified. Regardless of species, he continually aims to provide every patient with a comfortable stress-free visit.

Dr. Kelleher enjoys spending his spare time outdoors with his family including two dogs, two cats and six chickens.  He is an avid fly fisherman, skier, and hiker.

Dr. Kinnison was born in Colorado and then moved to Milton, New Hampshire at the age of thirteen. Soon thereafter, she became a volunteer at the Milton Veterinary Clinic, where she witnessed a Caesarean section being performed. She was so inspired that she decided to pursue veterinary medicine as a career.

She received her Bachelor of Science degree from Wilson College in Pennsylvania and her Doctor of Veterinary Medicine degree from Michigan State University. She practiced at two other animal hospitals in New England before joining our team in 2007.

Dr. Kinnison appreciates all aspects of medicine and surgery but has particular interest in dermatology and internal medicine. She also has strong interest in small mammals, or what we refer to as “pocket pets”.

She aspires to learn more about animal behavior and how to make nervous patients less stressed at their visits to our hospital. Dr. Kinnison states that she “truly loves being able to participate in the human-animal bond. I also love fixing a problem and being able to enhance that animal’s life.”

Dr. Kinnison and her husband, Dave (Our Hospital Administrator), have two children, named Matt and Emily. She and her family love to travel together in their camper. She also enjoys hiking, gardening and reading. Her furry family members include a Beagle mix named Casey, and a cat named Jiminy.

Originally from Maine, Dr. Rogers gained her passion for veterinary medicine after growing up with her childhood Labrador named Abbie.  Abbie had several different illnesses over the years and Dr. Rogers developed a strong interest in solving the puzzles of medicine and overcoming challenges of treatments.

Dr. Rogers graduated with Bachelors of Science from Bay Path University in Massachusetts.  From there, she moved south and attended the University of Tennessee and received her Doctorate of Veterinary Medicine.  While attending veterinary school she also became a first time owner of two horses, Wrangler and Wilbur along with two cats Fenway and Meeko.

Dr. Rogers has special interest in internal medicine, geriatric medicine along with preventative medicine and pain management.  Her goal is to establish long term relationships with her patients and clients as well as become an accredited veterinarian by the USDA.